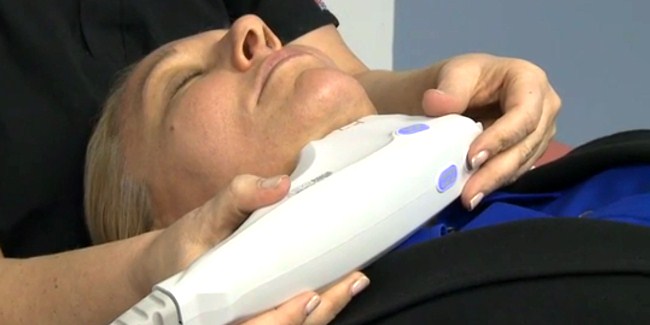 So how does HIFU work? HIFU harnesses the power of ultrasound to non-invasively lift and tighten skin. Ultrasound is a form of mechanical energy that is significantly different than Light (Lasers) and Electrical (Radio-Frequency) energy.

It’s the most profitable non-surgical treatment available to salon and clinic owners today.

During treatment, ultrasound is micro-focused below the skin’s surface to cause cellular friction and precise, pin-point heating. Similar to a magnifying glass focusing sunlight, heat is only generated at the focal point, leaving the skin’s surface and intervening tissue unaffected.

Tissue at the focal point is heated to around 65°C, causing immediate collagen contraction and denaturation, and initiating aggressive collagen synthesis. Over 90-180 days, the wound-healing response stimulates long-term tissue remodelling and leads to further lifting and tightening, with results that can last a year or more.

The initial lift you may see immediately after your treatment develops from thermally induced collagen coagulation, denaturation and contraction within precise, well-defined lesions. The creation of these lesions leads to an inflammatory wound-healing response which stimulates long-term tissue remodelling and leads to further lifting and tightening. Both stages of lift that occur following treatment are described in further detail below.

HIFU focuses ultrasound waves to precise, well-defined areas in dermal and subcutaneous tissue which causes the creation of distinct Thermal Coagulation Points (otherwise known as TCPs). Current treatment guidelines call for the creation of around 16,000 of these TCPs at various depths in the tissue during a typical full face and neck treatment

Ultrasound waves induce a vibration in molecules within the targeted tissues, and the resulting molecular friction generates heat. This heat, generated by ultrasound waves, generally reaches temperatures of 60-70°C at the focus of the TCP.

This is important because collagen, a protein within skin dermal and subdermal layers (including the superficial muscular aponeurotic system (SMAS), begins to lose its organised structure and eventually denatures at these temperatures.

Collagen fibrils, when heated to a specific temperature over a period of time, will contract because the intramolecular hydrogen bonds in the collagen structure are broken (see diagram).

It was demonstrated that the internal cross-links holding the collagen fibrils together begins to break at a threshold temperature of 58°C, with the main transition to denaturation occurring at 65°C. This phenomenon explains the contraction of collagen that leads to the observed initial lift in the tissue immediately following a treatment.

Additionally, other studies have demonstrated that shrinkage in collagen fibrils is evident at 57°C, with further disruption and more complete denaturation of the collagen fibril at 60°C. It was demonstrated that the tissue shrinkage or lift that results as a result of the collagen denaturation ranges from 11% at 65°C to a maximum of 59% at 80°C and generally occurs within less than 2 minutes of heat application.

Reaching these threshold temperatures during a treatment are important in order to optimise the effect on collagen denaturation, which ultimately leads to collagen synthesis. As stated above, this initial shrinkage in collagen fibrils results in the initial lift observed after treatment.

The TCPs created by the HIFU technology are recognised by the body as an “injury”, thereby initiating the wound healing response. This response involves tissue repair and synthesis of new collagen, which over time leads to tissue lifting and tightening. There are three overlapping stages associated with this stage of lifting.

Inflammation During this phase, cells called macrophages play an important role in breaking down and phagocytizing (engulfing) “injured” tissue and releasing cytokines (signalling molecules) that attract fibroblasts (a type of cell that produces collagen). Other factors released during this phase also contribute to the breakdown of denatured collagen and the synthesis of new collagen.

Proliferation This phase can overlap with inflammation and is generally characterised by fibroblasts synthesizing new collagen (mainly Type III) and other mediators important to rebuilding the collagen matrix such as elastin, fibronectin, glycosaminoglycans, and proteases.

Fibroblasts are seen within the focal injury zone by day 28, suggesting that active dermal remodelling has begun. A significant increase in the amount of elastin is also evident. When performing histological analysis on facial skin treated with Ul-therapy it was noted that the average area fraction of collagen in the reticular dermis significantly increased by 23.7% over baseline and overall dermal thickness was greater.

This phase generally starts at 3 weeks and can last for up to a year. It represents the period during which type III collagen is replaced by type I collagen, which forms tight cross-links with itself and other proteins. Studies have found increased collagen production in skin biopsies over 12 months after the thermal heat treatment.

The remodelling process leads to complete replacement of thermal injury zones with new collagen by 10 weeks post treatment. Generally, the duration of this stage is dependent upon factors such as client age and racial differences in skin tissue. In general, increased client age can be associated with delayed onset of healing, protraction of phases and an inability to reach the same level of healing.

Advanced age may also be associated with decreased tensile strength of the ‘wound’ after repair. The collagen remodelling process is a crucial step in facial skin tightening and lifting.