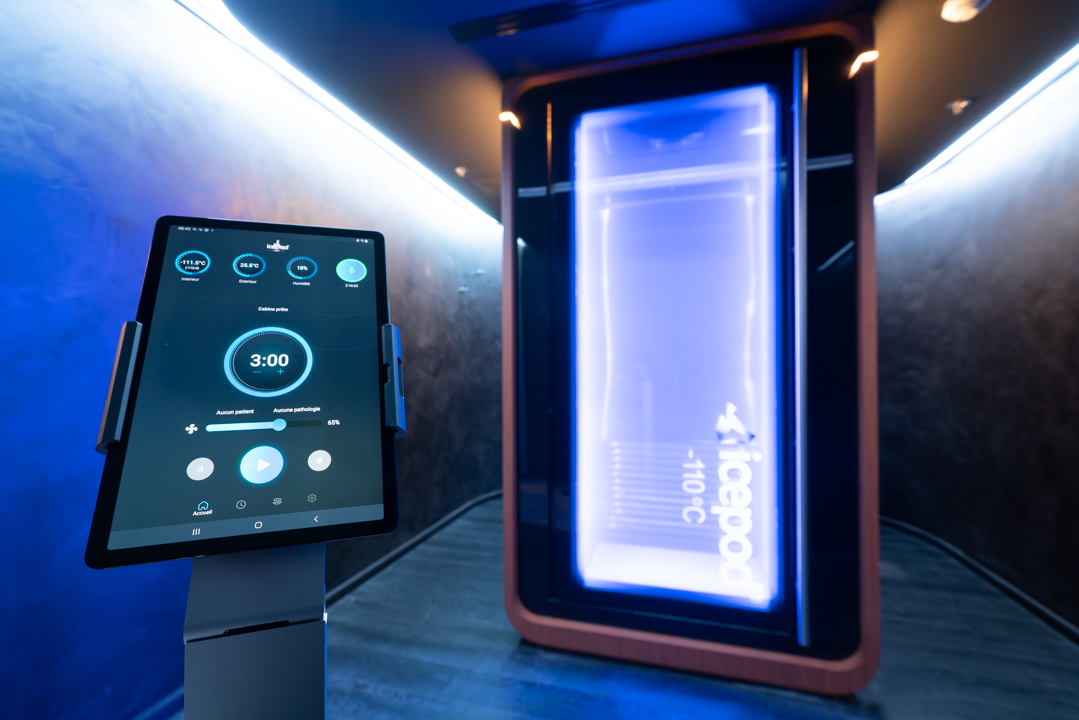 When it comes to investing in a cryotherapy chamber, there are a few different variations to consider, such as:

Head In or Head Out That is the Question?

This guide is purely concerned with ‘‘head in“ or ‘‘head out“ cryotherapy!

A big advantage of the larger ‘‘head in“ cryo chambers, is that they allow you to have multiple people to have true whole body cryotherapy all at the same time.

Now for those of you wanting a cryochamber for home, you might be thinking this is pointless, however, think if you are a professional sports team, with 30 or so players and you have to wait for one at a time, this is going to take around 2.5 hours to get everyone chilled!

Though a lot of great cryo electric chambers are also one person only, ALL cryosaunas (head out) are for single person use. This works better or worse for you depending on your requirements, so neither is better, just what’s better for what you want a cryotherapy machine for.

No Entry Without a Mask

The one thing I personally (and others) don’t like, is that in a cryo chamber (head in) you annoyingly have to wear not only gloves, socks, and underwear but also head protection and a mask. I appreciate not the end of the world, though just an added hassle.

How Big Is It?

Though not always, as there are some really big cryosaunas, generally though, a cryo chamber (head in), will take up slightly more space for a single user and of course it goes without saying, a multi-person cryochamber will take up a lot more space, and I mean a lot more!

The next consideration is installation. A cryosauna is generally really easy to install, and in fact so easy, you can do it yourself in around 30 minutes.

However, a cryochamber, requires a lot more technical know-how. I installed my own personal cryosauna at home, which took me around 30 minutes to get going from being delivered, however, if I was to upgrade to a cryochamber in the future, I would require the assistance of an engineer and I sell these chambers!

A cryo chamber, will as described above, require professional installation. This is not an issue though, as the company you buy your cryo chamber from will (or should) have the capabilities to do this for you, as part of their package. However, be aware if you intend on moving in a year or two, this will be an added hassle and cost, to factor in your move.

The purchase of a cryochamber will cost much more than a cryosauna, at least twice that of a cryosauna, though for the best, you can expect it to be more like 3 or 4 times the price.

The best cryochamber in the world is £130,000/$150,000, being a single user chamber, we don’t sell these, however, The Longevity Clinic can help point you in the right direction..

How Low Can You Go?

Finally, you also can’t go as cold in a cryochamber as a cryosauna, with the limit generally being around -120°C, whereas with a cryosauna you can reach down to -180°C. However, one could argue as your head is actually exposed to the cold air, in a nitrogen cryotherapy machine, unlike a cryosauna, where your head sticks out the top, you don’t need to get as cold. In fact, you get a lot more health benefits from a cryochamber, which I would agree with.

Its also hardly a surprise that having the ‘‘head in” and therefore also benefitting from the cold, will create a more significant reaction by the body, in response to being exposed to these temperatures. In the chamber, the human body responds best to a temperature of -110 ˚C down to -130˚C which is proven to have positive effects. This creates a 30% increase in autonomic nervous system responses, immediately stimulating the vagus nerve. This is something we really want, as this vagal response, reduces stress and anxiety by reducing the heart rate and blood pressure.

This may prompt the release of endorphins, activate the immune system, boost blood flow and metabolism, detoxify cells, and activate healing processes.

Furthermore, a study in France in 2013, measuring the biomarkers epinephrine, norepinephrine, and dopamine, to analyse the activation of the autonomous nervous system, confirmed the whole body or ‘‘head in”, worked best.

Which is Best For You a Cryo Chamber or Cryosauna?

It really all depends!

Factors that will have an influence on which type of cryotherapy chamber you invest in, include: